This post can also be found on our team's TLLP blog.

It has been an observation of mine that students are struggling to transfer the meta-cognition skills gained in other places into the math classroom. The ideas and structures I am putting onto their math learning seem to be very different than anything they have done in math before that they do not realize they have done it elsewhere. It has made for some interesting reflection on my part.

In continuing with my journey to explore student reflection I wanted to have students self-evaluate at midterm and conference with me to determine their report grade and report card comments. I set this up using an assignment on Google Classroom and had the sign up for a conference time-slot.

My grade 10s were given a reflection document that included a few things (outlined via images below).

Part 1: Identify pieces of evidence and start to identify criteria from the map that were evident in that evidence 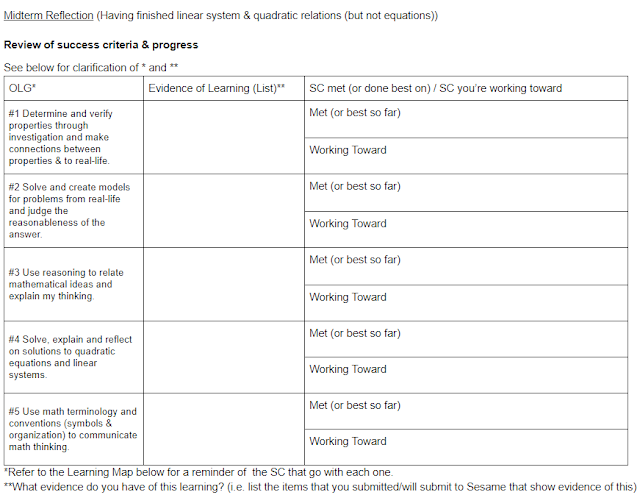 Part 2: Highlight where evidence shows that they are for each criteria of each overarching learning goal in the course (the map is a partial map, only including the aspects relevant at this point in the course) 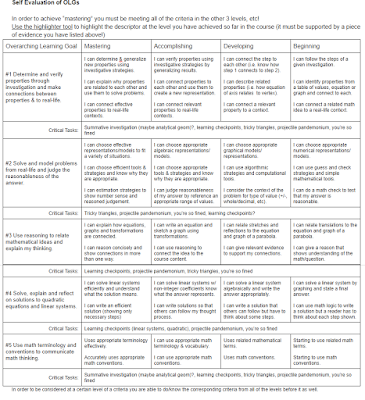 Part 3: Self-evaluate and reevaluate learning and next steps 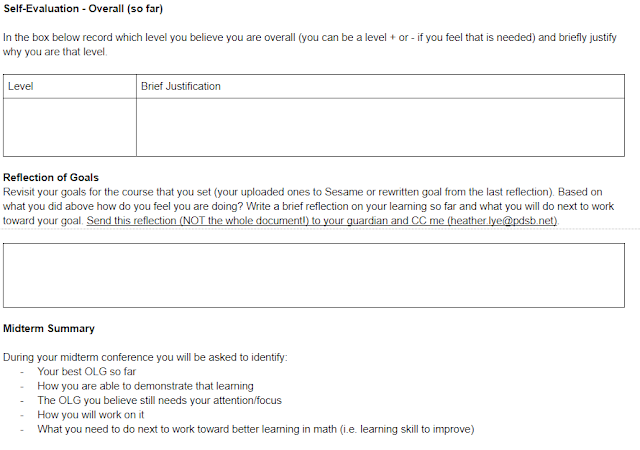 When this was all said and done I opened this file when students came to me for their conference. Since I was finding that students were struggling with this process in math I ended up spending most of this time looking at their map with them and identifying areas where we disagreed so that we could discuss them. I recognize that I had not done the map justice (did not explain it well enough) and had already known that it would be difficult as it would be their first real exposure to it (I was only able to write the map myself the week before giving this assignment). Needless to say, I learned a lot - and had already planned to get a student focus-group together to help me reword the map more appropriately for students.

So next time I will:
- get students using the map earier
- rework it to use more student-friendly language
- model how to use the map
- have students evaluate using the map before midterm
- continue to build student reflection and self- & peer-assessment skills explicitly

The grade 9s I do not have a map for so I approached their reflection by having them fill in a chart while referencing the parts of the curriculum document that were relevant at this point. They were often able to identify specific expectations that they were doing well on and ones that they had to work on. What ended up lacking was them considering these expectations from a lens that expanded from just the "understand and use" - I need a way to make sure that the 9s consider the math processes as well in the future.

Overall students responded fairly positively during conferences when I pointed out things that had not considered that showed they were struggling with aspects of the course, but the discussions took a long time. The conferencing process was valuable, but I need to seek some ways to make it more manageable and to be away from facilitating student learning for less time.
Posted by Heather Lye at 11/22/2017 04:23:00 PM